The Department of Commerce recently named the Center for Organ Recovery and Education as a 2019 recipient of the Malcolm Baldrige National Quality Award. Based in Pittsburgh, CORE is the federally designated organ procurement organization, or OPO, serving western Pennsylvania, West Virginia and Chemung County, New York. CORE’s mission is to save and heal lives through donation, and the center is one of just six nonprofit, health care and education organizations honored this year for performance excellence in their industries. 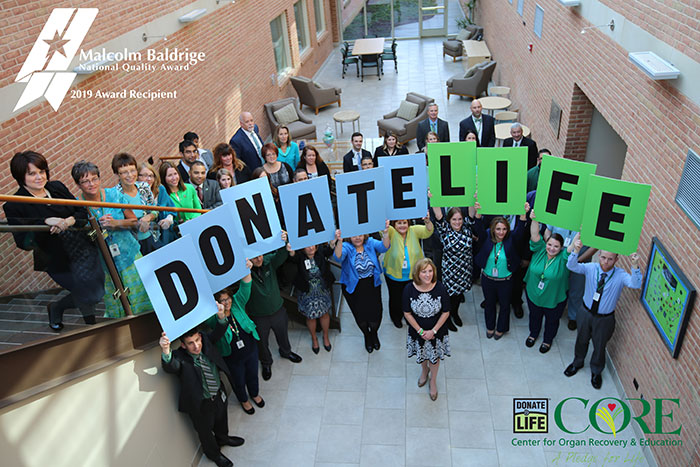 “This award is a testament to CORE’s dedication to our mission to save and heal lives through donation,” said CORE president and CEO Susan Stuart. “It’s a showcase of our values, and of our relentless drive to innovate and integrate programs and best practices. It’s proof that, in the improvements we make and the excellence toward which we strive, CORE is changing the lives of grieving donor families, courageous transplant recipients and those holding out hope for a lifesaving transplant.”

Key factors contributing to CORE’s recognition by the Baldrige Performance Excellence Program include:

Learn how CORE is guided by their mission, vision and values.

The Baldrige award is a presidential-level honor, recognizing exemplary practices among American organizations and businesses including an unceasing drive for radical innovation, thoughtful leadership and administrative improvement. CORE is the third OPO to receive the Malcolm Baldrige National Quality Award. In 2015, Mid-America Transplant Services was the first to receive this honor, followed by Donor Alliance in 2018. Learn about CORE’s Baldrige journey here.

Managed by the National Institute for Standards and Technology, the Baldrige award is named after former secretary of commerce Malcolm Baldrige and is the highest recognition for performance excellence in the country. The 2019 Baldrige awards will be presented at a ceremony on March 24, 2020, during the Baldrige program’s 32nd annual Quest for Excellence conference, which will be held in National Harbor, Maryland.

Explore how other OPOs are improving performance and increasing transplants nationwide.