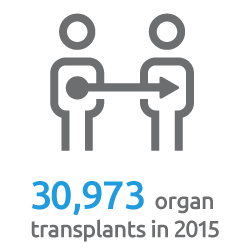 Organ transplants performed in the United States in 2015 exceeded 30,000 for the first time annually, according to preliminary data from United Network for Organ Sharing (UNOS). UNOS serves as the Organ Procurement and Transplantation Network (OPTN) under federal contract.

“This landmark achievement is a testament to the generosity of the American public to help others through donation, and their trust in the transplant system to honor their life-saving gift,” said OPTN/UNOS President Betsy Walsh, J.D. 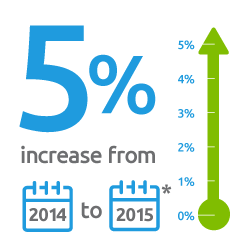 The 30,000 threshold was surpassed with transplants performed as of December 19, 2015. For the year, 30,973 transplants were reported, representing an increase of nearly 4.9 percent over 2014 and continuing a three-year trend of annual record numbers. Approximately 81 percent of the transplants (24,982) involved organs from deceased donors, who can donate multiple organs. Nineteen percent (5,986) were made possible by living donors. Notable trends included the following:

“We work every day to give as many people as possible an opportunity for renewed life and health through transplantation,” said Brian Shepard, UNOS’ Chief Executive Officer. “These trends are encouraging, and they make a huge difference not only for transplant recipients but for many more people whose lives they touch. But we have much more work to do to meet the needs of more than 121,000 men, women and children who continue to wait for a transplant.

“As the nation’s transplant network, we will continue to seek improvements to the matching system to ensure that more organs are accepted and used with the best possible outcomes for recipients. Opportunities remain for us to use more of the organs currently donated, even as we hope for more people to choose to save lives through donation.” 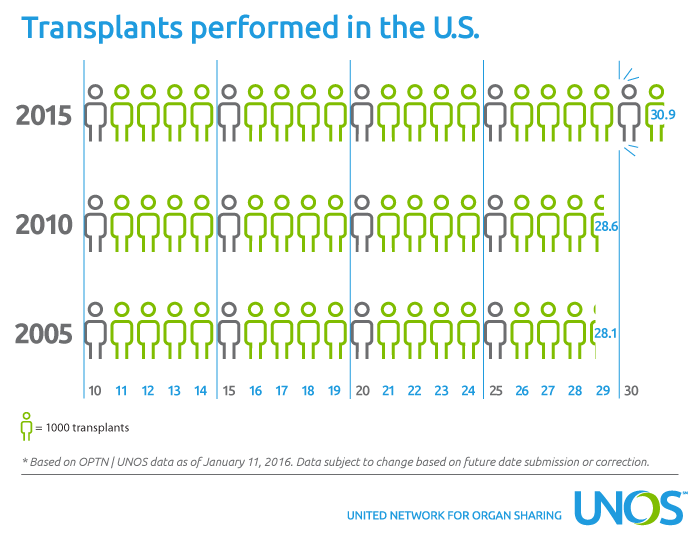