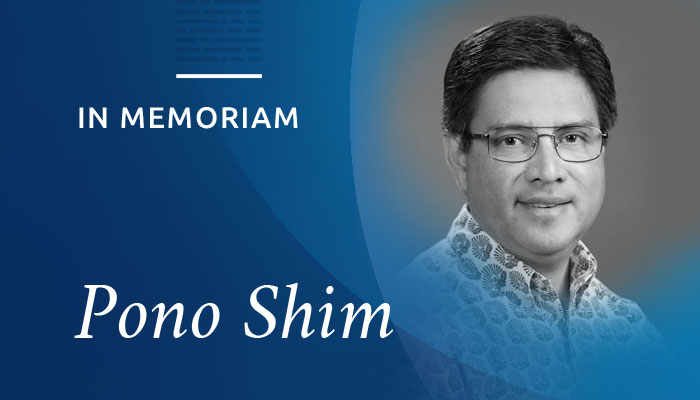 UNOS honors the generosity, spirit and caring of Pono Shim, a member of the Boards of Directors of UNOS and the OPTN, who passed away in April 2022 at the age of 58.

“Pono’s commitment to donation and transplant, and to the OPTN, was just one expression of a lifetime spent in service to the people around him,” said UNOS CEO Brian Shepard. “He was a servant leader in his community in Hawai’i, and is being remembered there today as one who told stories that connected the hearts of those around him.”

Shim became a living kidney donor in 2013 for a friend from high school.* His passion for service and advocacy led him first to volunteer for the OPTN Living Donor Committee. In addition to his role on the Board of Directors, he served on the Finance Committees of the OPTN and UNOS and as a visiting Board member on the OPTN Minority Affairs Committee.

He was the CEO of the O’ahu Economic Development Board. He was also an avid storyteller and teacher of the Hawai’ian culture and the values of Aloha. Those values influenced his decision to donate, as he noted in an interview shortly after the donation. One of the major qualities, he noted, is, “You don’t wait for somebody to ask for something. You give before they have to ask.”

*For more information: A profile of Shim’s donation to his friend, Malcolm Lutu, was featured in the video of UNOS’ 2020 National Tree of Life ceremony.