UNOS was saddened to learn of the death of kidney–pancreas recipient and former OPTN/UNOS board member Debi Surlas, who died February 5 after a valiant struggle with breast cancer. She was 61. 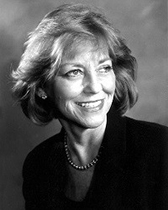 Only two years after her 1993 kidney-pancreas transplant, Surlas began what became 20 years of indefatigable volunteer effort on behalf of UNOS and the transplant community.

Her special focus was on the needs of transplant patients, both during her OPTN/UNOS service and when she was selected by HHS Secretary Tommy Thompson to serve on the Advisory Committee on Organ Transplantation.

“I made sure that the general patient population was represented,” she once said. ‘I’m never afraid to advocate.”

Her first OPTN/UNOS role was as a member of the patient affairs committee, later serving two terms as chair. Over the next two decades, she served on the kidney transplantation committee, the heart review board for her region, the executive committee’s policy advisory group and as a visiting board member on the membership and professional standards committee. She also was a member of the advisory committee that planned the National Donor Memorial at UNOS headquarters.

Most recently, she had served on the UNOS Foundation board of directors. Known affectionately by those who worked with her as the “Energizer Bunny,” Surlas’ can-do leadership was all the more remarkable because it was often in the face of the debilitating effects of illness and treatment, which included a period of total blindness.

Former UNOS president James Wynn, M.D., called Surlas an ‘abiding force for patients at UNOS, and a relentless advocate for their interests.’ In 2009, Surlas informed UNOS that she had included a gift to UNOS in her will, the first planned gift in UNOS history. Afterward, the UNOS Foundation honored her by establishing the Deborah C. Surlas Legacy for Life Society to recognize supporters who include UNOS in their estate plans.

Donations in memory of Debi Surlas may be made to UNOS, c/o the Deborah C. Surlas Legacy for Life Society, 700 N. Fourth Street, P.O. Box 2484, Richmond, VA 23218, or you may give online. Charitable gifts support UNOS’ mission to save lives through organ transplantation.