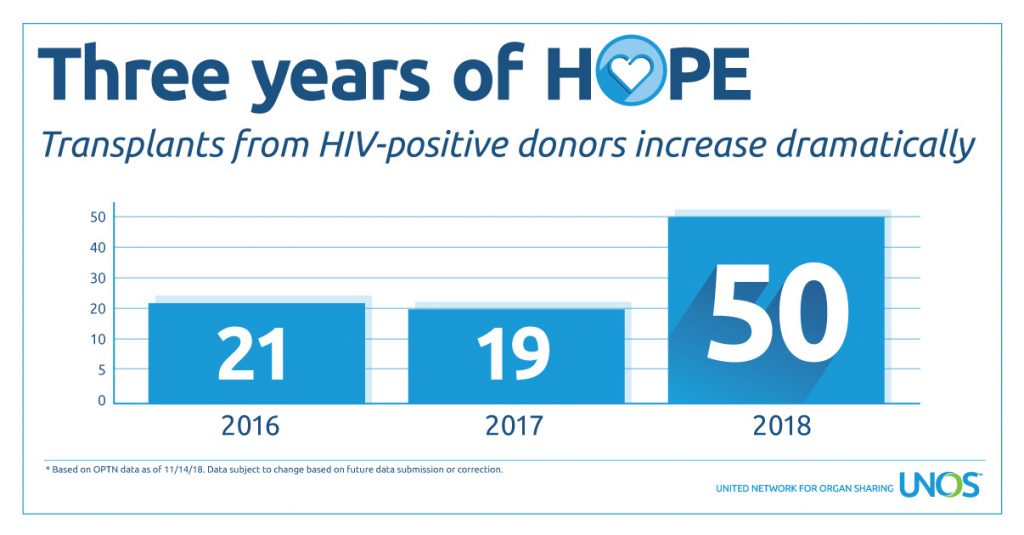 Transplants allocated through the HOPE Act have more than doubled over last year. Organs from donors that initially test positive for HIV have been transplanted into HIV-positive recipients since 2016; 50 of them in 2018. This indicates that more and more HIV-positive people are becoming aware that they can leave the legacy of life through organ donation.

UNOS has been supporting HIV-positive candidates through the HOPE Act since its implementation. “The HOPE act has provided the ability to transplant organs from individuals not previously considered as donors. This has increased the opportunity for HIV+ recipients on the waiting lists to be transplanted,” said UNOS Chief Medical Officer David Klassen. “The HOPE Act program was slow to get started but in recent months as more transplant centers have initiated HOPE Act transplant programs and OPOs have identified additional donors, the number of transplants has increased substantially.”

Organ procurement organizations can run matches for HIV-positive donors. The only candidates who will appear on match runs for these donor offers will be those listed at transplant programs that have an IRB-approved protocol, and whose HIV status and willingness to accept an HIV positive kidney or liver has been confirmed.

Any participating hospital must conduct transplants under IRB-approved research protocols conforming to the Final Human Immunodeficiency Virus (HIV) Organ Policy Equity (HOPE) Act Safeguards and Research Criteria for Transplantation of Organs Infected with HIV, developed by the National Institute of Allergy and Infectious Diseases, one of the National Institutes of Health.

Current estimates suggest that more than 1.2 million people are HIV-positive; 35,000 people are newly infected every year. While life expectancy of HIV positive patients nears that of the general population, end-stage liver or kidney disease is expected to increase as the population ages, creating an even greater need for more organs. It’s critically important for transplant surgeons to educate HIV patients about the HOPE Act and organ donation if the availability of organs is to grow.

Search for a participating transplant hospital