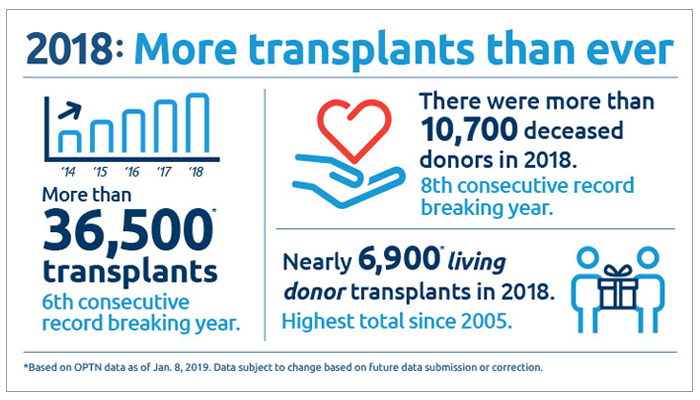 The 36,527 organ transplants performed in the United States in 2018 set an annual record for the sixth straight year, according to preliminary data from United Network for Organ Sharing (UNOS), which serves as the national Organ Procurement and Transplantation Network (OPTN) under federal contract. In 2018, the total number of organ transplants exceeded 750,000 performed since 1988, the first full year national transplant data were collected.

“We are incredibly proud and grateful to have facilitated a record number of lifesaving organ transplants in 2018,” said Sue Dunn, president of the OPTN/UNOS Board of Directors. “We never forget that our work is made possible by the selfless donors and their courageous families who make the powerful decision to give the gift of life. We will continue to work tirelessly to maximize that gift on behalf of the nearly 114,000 who await a transplant.

“In 2018, 10,721 people provided one or more organs for transplantation as deceased organ donors. This was a four percent increase over the 2017 total, and it continues an eight-year trend of record-setting donation.

While the number of potential deceased organ donors varies among different areas of the country due to differences in population size and medical characteristics, increases were noted in many areas. Of the 58 organ procurement organizations (OPOs) coordinating deceased organ donation nationwide, 41 (70 percent) experienced an increase in donors from 2017 to 2018, including at least one OPO in each of UNOS’ 11 regions.

“A key to continuing the success of the field is to support efficient decision-making and improve communications among OPOs and transplant centers,” said Brian Shepard, Chief Executive Officer of UNOS. “We are working on a number of innovation projects to increase the efficiency of these key processes.”

As in several previous years, some of the increase in deceased donation is due to increased usage of donors with a broader set of medical criteria than was considered in the past. Nearly 20 percent of donors in 2018 donated after circulatory death as opposed to brain death. Nine percent of deceased donor kidney transplants involved organs with a kidney donor profile index (KDPI) score of 86 or higher, which may function less time compared to low KDPI kidney offers but may also shorten the waiting time for transplant candidates. Other donor characteristics setting all-time records in 2018 included an age of 50 or older and/or being identified as having increased risk for blood-borne disease.