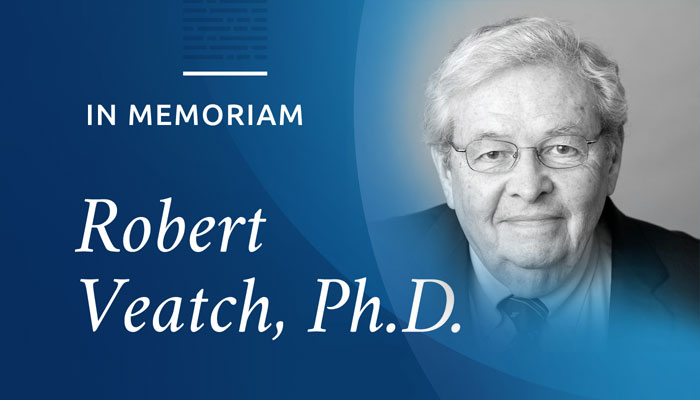 United Network for Organ Sharing honors the life and service of Robert M. Veatch, Ph.D., a pioneer in the field of bioethics and a powerful advocate of its application to organ donation and transplantation. Veatch recently passed away at the age of 81.

Veatch earned a doctorate in religion and society from Harvard University, as well as degrees in pharmacy and pharmacology. He began his career at the Hastings Center before beginning a tenure of more than 40 years as a scholar and professor at the Kennedy Institute of Ethics at Georgetown University. He served several years as director of the institute and founded the Kennedy Institute of Ethics Journal.

He was a prolific author and contributor for many seminal works in bioethics, including Case Studies in Medical Ethics and A Theory of Medical Ethics. He served as a consultant and advisory panel member in numerous capacities, including the President’s Commission for the Study of Ethical Problems in Medicine and Biomedical Research. As an educator, he taught and mentored many bioethicists who continue to make advances in areas he was among the first to study.

He had an abiding interest in the ethics of organ donation and transplantation, with a keen focus on maintaining the balance between medical utility and justice in organ allocation. He served more than 30 years on the governing board of the Washington Regional Transplant Community. He was a member of three different Organ Procurement and Transplantation Network and UNOS committees (Ethics, Living Donor and Vascularized Composite Allograft) over a span of more than 20 years. He served a total of 15 years on the ethics committee, ending his last term earlier in 2020, and he provided a vital link of expertise and continuity for other members who joined the committee over time. His tenure is the longest of any ethics committee member.

“The Ethics Committee benefited greatly from Bob’s generous service over many years,” said Keren Ladin, Ph.D., the committee’s chair. “His thoughtful, methodical approach and sharp wit pushed us all to be better ethicists and served, at its core, to promote the best interest of transplant patients. His sense of humor, stories of bluegrass, and friendship are deeply missed.”

Note: Additional information and commentary about Veatch is available on the websites of the Washington Regional Transplant Community and the Kennedy Institute of Ethics.