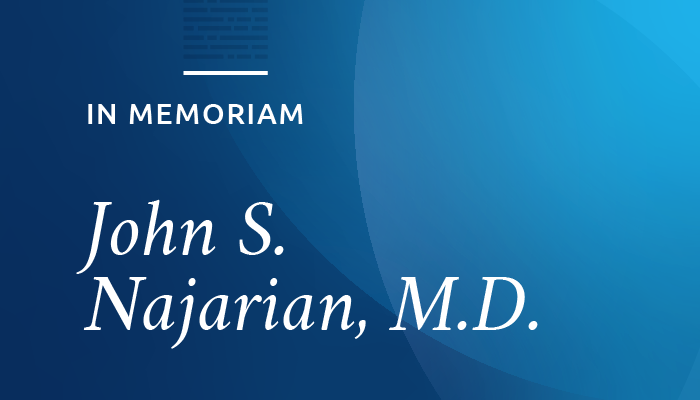 United Network for Organ Sharing honors the pioneering work of John S. Najarian, M.D., a mentor to many transplant practitioners and an early leader in the development of transplant surgery and immunology.

After earning his medical degree from the University of California at San Francisco and serving as a surgeon in the United States Air Force, Dr. Najarian developed an early interest in organ transplantation. He completed fellowships in transplant-related immunology and surgery at The University of Pittsburgh and the Scripps Clinic before founding the transplant program at UCSF Medical Center. He then moved to the University of Minnesota Medical Center, where he served the rest of his career.

Along with his colleagues, Dr. Najarian made many pivotal contributions in numerous areas of the developing field, including living donor transplantation, pancreas and islet transplantation, pediatric transplantation and transplant immunology. He and his team pioneered the use of anti-lymphocyte globulin, one of the first effective immunosuppressant compounds.

He was especially influential in the training of transplant surgeons. Dr. Najarian was a founding member and eventual president of the American Society of Transplant Surgeons (ASTS) and was a longtime chair of its Fellowship Training Committee, which established and upgraded requirements for many of today’s practicing transplant surgeons. He personally oversaw the residencies and fellowships of many transplant professionals throughout his long tenure at the University of Minnesota.

In an interview with ASTS reflecting on his career, he recalled his sense of wonder that carried him throughout his academic and clinical career. Upon hearing of the first successful kidney transplant, he said, “If you can put an organ in an individual and save his life, that is remarkable and that is the direction I want to go.”

NOTE: See a video interview with Dr. Najarian on the website of the American Society of Transplant Surgeons.