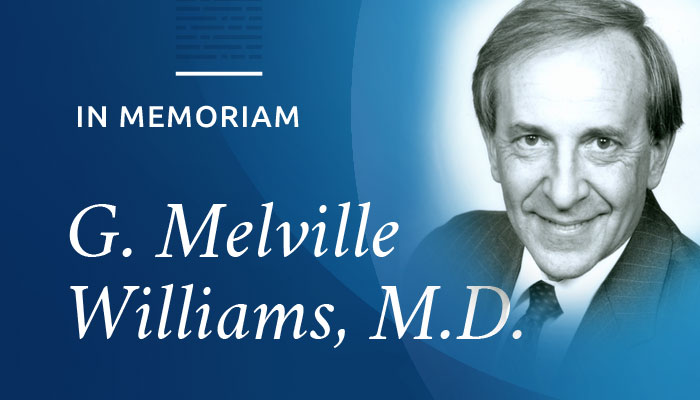 The life and legacy of a pioneer in transplant and the founding president of UNOS.

United Network for Organ Sharing honors the life and leadership of G. Melville Williams, M.D., a transplant pioneer and a towering force in the development of the transplant system in the United States. He passed away Aug. 27, 2020, at the age of 89.

Dr. Williams trained in transplant surgery at the Medical College of Virginia (MCV), one of the country’s earliest transplant programs. He served on the MCV faculty before relocating to Johns Hopkins University School of Medicine, where he spent more than 40 years as a surgeon, professor of surgery, and chief of transplantation. Even after his retirement from active surgery, Dr. Williams continued to be involved in research at the institution. He performed seminal research in the understanding and treatment of immunologic organ rejection. He also trained and mentored countless surgeons, physicians and other health professionals during his lengthy tenure.

Dr. Williams was an early participant in the South-Eastern Organ Procurement Foundation and the founding president of UNOS from 1984 to 1985. In that capacity he advocated for the passage of the National Organ Transplant Act and prepared the organization for its eventual role as the national Organ Procurement and Transplantation Network. He later chaired the UNOS Scientific Advisory Committee.

A founding member of the American Society of Transplant Surgeons (ASTS), Dr. Williams also served as its president from 1982 to 1983. ASTS recently recognized him with its annual Pioneer Award, the society’s highest honor. Additionally, he was president of the Halsted Society and the Southern Association of Vascular Surgery.

“Mel Williams was a true pioneer and deserves all of the accolades that are being sent out by the world right now,” said David C. Mulligan, M.D., president of the UNOS board of directors, professor of surgery at Yale University, and chief of transplantation surgery and immunology for Yale New Haven Health System. “He was not only innovative in science and clinical care, but also in logistics and forward planning. He was a visionary, but most of all, he was always kind and generous. I was honored to know him.”

Dr. Williams was a passionate advocate for promoting organ donation. He chaired the board of directors of the Living Legacy Foundation, the organ procurement organization that serves most of the state of Maryland.

“Upon first meeting Dr. Williams, one would never have known his outstanding and storied resume, but would certainly appreciate his gentlemanly qualities and the experience with which he drew his wisdom and advice to many of us new to the field of transplant and vascular surgery,” said Matthew Cooper, M.D., vice-president of the UNOS board of directors, professor of surgery at Georgetown University School of Medicine and director of kidney and pancreas transplantation at MedStar Georgetown Transplant Institute. “He was kind, considerate, and always willing to give of his time to anyone. He will be sorely missed, but his influence will live on in the many he inspired and mentored.”

Known among his friends and colleagues to be modest about his personal achievements, Dr. Williams never failed to promote the importance of the causes he served. In a 1992 speech at a UNOS forum, he remarked: “It is imperative that we all stand united behind the organization that the transplant community single-handedly built. UNOS is the transplant community, and we are UNOS. We have at our disposal the greatest minds and talents available anywhere in the world to fashion change and improvements that ultimately benefit the transplant professional, the patient and the general public at large.”

Read an interview with Dr. Williams in the ASTS Chimera Chronicles.