During 2017, the number of deceased organ donors in the United States topped 10,000 for the first time, according to preliminary data from United Network for Organ Sharing (UNOS), which serves as the national Organ Procurement and Transplantation Network (OPTN) under federal contract. For the year, organs were recovered from 10,281 donors, representing a 3.1 percent increase over 2016 and an increase of 27 percent since 2007.

A total of 34,768 organ transplants were performed in 2017 using organs from both deceased and living donors, according to preliminary data. This total is a 3.4 percent increase over 2016 and marks the fifth consecutive record-setting year for transplants in the United States. Record number of donor organs were recovered and transplants occurred for each of the four most common organs transplanted – kidney, liver, heart and lung. 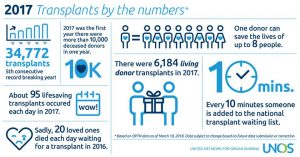 “We are grateful that more lives are being saved, year after year, thanks to the boundless generosity of organ donors,” said Yolanda Becker, M.D., president of the OPTN/UNOS Board of Directors. “We remain committed to increasing the number of transplants still further to help the many thousands of people in need of a transplant to sustain them and vastly improve their quality of life.”

Approximately 82 percent (28,587) of the transplants performed in 2017 involved organs from deceased donors. Living donor transplants accounted for the remaining 18 percent (6,181). In the 30-year span from 1988 (the first full year national transplant data were collected) through 2017, a total of 721,742 transplants have been performed nationwide.

While the number of potential organ donors varies among different areas of the country due to differences in population size and medical characteristics, increases were noted in many areas. Of the 58 organ procurement organizations (OPOs) coordinating deceased organ donation nationwide, 35 (60 percent) experienced an increase in donors from 2016 to 2017, including at least one OPO in each of UNOS’ 11 regions.

Broadening of clinical criteria for potential donors accounts for some of the ongoing increase in deceased organ donation and transplantation. In 2017, as compared to 2016, a higher proportion of donors had medical characteristics such as donation after circulatory death as opposed to brain death, drug intoxication as a mechanism of death, age of 50 or older, and/or being identified as having increased risk for blood-borne disease.

“As we increase our understanding of medical criteria that contribute to successful transplantation, donation and transplantation professionals have been able to use organs from a wider set of potential donors,” said David Klassen, M.D., UNOS Chief Medical Officer. “In doing so, we continue to carefully balance the opportunity for transplantation with a commitment to maintaining patient safety.”