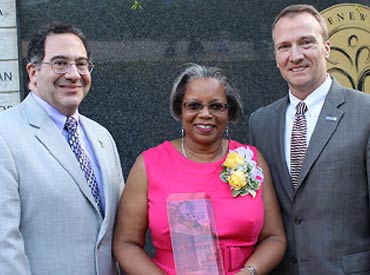 United Network for Organ Sharing (UNOS) presented Barbara Lee, M.S.W., of Greenville, N.C., the 2014 National Donor Memorial Award for Excellence in recognition of her work as a donation champion for more than two decades.  The award was presented during UNOS’ June board meeting in the National Donor Memorial at UNOS’ headquarters in Richmond, Va.

“Barbara Lee is indefatigable. She’s served as a social worker at Vidant Medical Center Transplant Services for more than 20 years and as an active volunteer at Carolina Donor Services for more than 10. She’s wonderfully and enthusiastically creative, with the drive, energy and know-how to turn an idea into reality—as many of her colleagues and fellow volunteers can attest,” said OPTN/UNOS president Kenneth A. Andreoni, M.D.

One of her first volunteer efforts was serving as a chaperone for Team North Carolina when it went to Salt Lake City for the 1996 U.S. Transplant Games. It was a rather modest beginning for efforts that since have reached out and educated various populations within the medical, interfaith and community settings, educating and increasing donor registrations across the state.

The effort that has perhaps had the most far-reaching impact was the result of being awarded a $100,000 grant in 2012 from the North Carolina “License to Give” Trust Fund Commission. After the award, Lee assembled a team of 12 donation advocates and created a nonprofit organization called the Eastern North Carolina Donor Impact Project (ENCDIP). ENCDIP’s purpose is to dispel myths and educate the African American and Latino communities about the need for minority donors, and since its creation has been highly visible at local festivals, health fairs and churches, schools and colleges.

UNOS established the National Donor Memorial Award for Excellence in 2010 to recognize exceptional advocates for organ and tissue donation.  UNOS solicits nominations for the award from the 58 organ procurement organizations in the United States. Lee was nominated for the award by Carolina Donor Services.